Spotted Lanternfly – Have We Been Here Before? 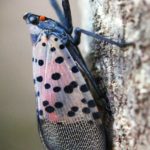 Invasive species and technology are very similar in that they seem to know no boundaries. At age 38 and growing up in a relatively tech-devoid household, I can remember a time without cellphones and the internet.  As cellphone and computer technology emerged and grew like wildfire, both made huge leaps in advancement in relatively short periods of time.

Locally, the newly invasive Spotted Lanternfly (Lycorma delicatula) has done the same.  Since its first sighting in 2014, its advancement has spread rapidly.  Much of Southeastern Pennsylvania has been dealing with the pest, and several other states are now reporting sightings.  I can only imagine the spread will continue.

While both invasive species and technology continue to influence how we do lawn, tree, and pest control, this isn’t the first time we are dealing with a new invasive species.  Enter the Japanese Beetle… 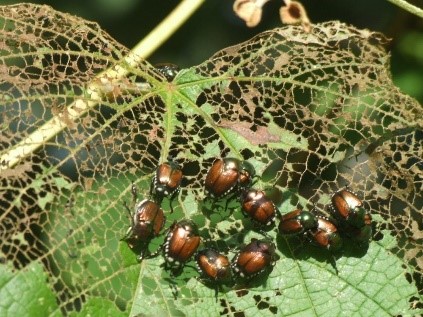 Briefly, the Japanese Beetle (Popillia japonica) was first found in the U.S.A. in New Jersey, around 1916.  Upon discovery, failed attempts were made to eradicate the pest and the pest eventually spread.  During the 1970’s, 80’s, and 90’s subsequent housing boom, turf and ornamental damage became a huge concern for homeowners.  Japanese Beetles were also causing a lot of agricultural damage on the east coast and many other parts of the nation.  New treatment methods and chemistries were developed and deployed as a way of controlling pests like Japanese Beetles.  Enter the soil injection…

Years ago, foliar spraying (spraying the leaves of the plant with an insecticide) was often the only good option for treating infested trees.  The Japanese Beetle treatments would have to be timed correctly because plants and trees could be defoliated in a matter of days once the beetles started feeding.  Weather, especially rain, was also a concern. Summer downpours, and even light rains, could often reduce a spray treatment’s effectiveness.  Soil injection treatments were developed as a safer, more effective way of controlling certain insects that damage trees and shrubs.

Modern soil injection services have replaced many of those foliar applications.  With this technique, plant protectants are placed in a band right next to the trunk of the tree to be treated. The plant protectant binds to the soil particles to minimize leaching, is absorbed by the tree roots, and then translocated throughout the tree.

Soil injections provide a more environmentally sound method for treating certain unwanted pests.  The plant protectants are contained within the tree or restricted to a small amount of treated soil at the base of the plant providing both adequate protection for the tree, as well as minimizing exposure to beneficial insects, wildlife and people.

Depending on the insecticide used, a single treatment can very often protect a tree for an entire growing season. In some cases, as many as four spray treatments can be replaced by a single soil injection.  No damage is done to the tree and the procedure can be completed relatively quickly.  Not all insects can be treated with soil injections, but many can, including the Japanese Beetle and Spotted Lanternfly.

Simply put, Spotted Lanternflies feed on trees by piercing into the tree and then using the tree’s internal “pressure” to push food material into their bodies.  The repeated feeding and open, ‘bleeding’ wounds weaken the tree over time.  The risk is similar with Japanese Beetle damage, where severe defoliation weakens the tree.

What It All Means

While the sight of the Japanese Beetles and Spotted Lanternfly are repulsing to most people, it’s the risk of plant death and loss that’s the bigger problem.  As a result, soil injection is a great way to control pest populations that are feeding on trees, and subsequently protect the health of the tree.

Make no mistake; soil injections are not the silver bullet in the grand scheme of ornamental pest control.  Soil injection treatments do not control pests that simply land on the tree.  The insecticide is contained inside the tree and therefore there is no exposure outside of the tree.  Spray applications may still be needed to reduce harboring populations on any plant, and reduce the nuisance aspect in a landscape.

Soil injections should be strongly considered as the primary treatment method for protecting the health of your trees and shrubs from both Japanese Beetle and Spotted Lanternfly damage.  Combined with select foliar applications, effective pest population control measures can be developed.

Read more about the Spotted Lanternfly

How to Treat the Spotted Lanternfly